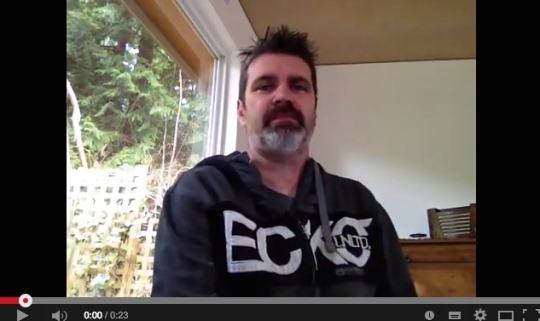 In case you don’t know who he is, Joël Fafard is an amazing Canadian singer-songwriter from Saskatchewan (now living in BC). I had the good fortune to be a member of Joël’s band for a year, maybe two. 1999-2000, I believe, just before I moved away from Regina to go to Toronto.  It was a great time – I learned a ton in that band, and had a lot of fun. Joël was experimenting a lot at the time, playing with different musicians, looking for a new sound and a different way to reach people, and I was a part of the project when he was trying out a more rock approach.

Somewhere around that same time, we also played together in a Regina Globe Theatre production of Cruel Tears, a country & western adaptation of Shakespeare’s Othello, written by Canadian author Ken Mitchell.  The play is set in rural Saskatchewan, and features bluegrass music written by Humphrey & the Dumptrucks. Joël and I were joined onstage by the legendary Bob Evans.

Just before I moved to Toronto, Joël’s band recorded an album called Head Smashed In, which was produced by Jason Plumb.  Unfortunately, because I wasn’t around for overdubs, I only made it onto one track of the final version of the CD – a tune called Fire Breathing Trout.  I’m still really proud of that track though – I did it in one take.  I had very little studio recording experience at this time.

Anyways, when I was reaching out to many friends and colleagues for support in my Indiegogo campaign, Joël was the first one to respond, and he did so with great enthusiasm.  In addition to the video you hopefully just watched, he also generously donated copies of his recent album, Borrowed Horses (a collaboration with Joel Schwartz – I know, a lot of Joels!), to be included in the “CD of one of my friend’s” perk.  Fire Breathing Trout will also be included in the “Complete Works of Joel Kerr” perk.