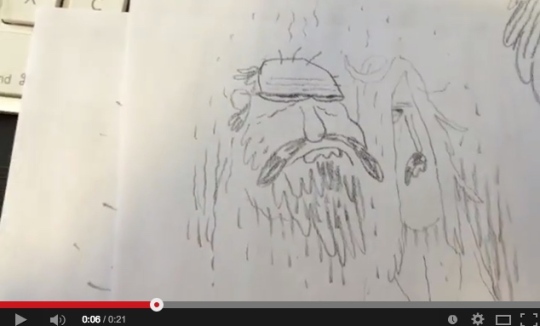 I mentioned Dave Cooper in my post about Craig Pedersen; he illustrated the cover of our duo album, It’s A Free Country. He recently took some time out of his incredibly hectic schedule working on the upcoming Nickelodeon show Pig Goat Banana Cricket (see the promo video for the show here) to send me a quick endorsement video for my Indiegogo camapign (music by yours truly).

I met Dave through Craig, at an IMOO concert in Ottawa a couple of years ago. I had known of him previously, partly through Craig, partly because of my interest in certain types of counter-culture illustration and animation (not an interest I’ve pursued deeply, but an interest nonetheless). I won’t attempt to describe his style, I won’t do it justice, but I highly suggest you check out his work! Anyways, in addition to being an incredibly talented artist, he’s a strong supporter of the Ottawa experimental music scene, AND he’s a super nice guy: the first time I met him, I mentioned I was going back to Montreal that night, and he offered me a ride! And I’m pretty sure he would have actually done it, if I had accepted.

Thanks for the support, Dave!!